George Clanton and Nick Hexum. Review. Ok… what can go wrong? Nothing! Because this is one clear example of a win-win-win situation. Either you know Nick Hexum from 311 and you never heard about George Clanton, or you know about George Clanton but completely unaware of Hexum (my case, my apologies Nick!). Or you don’t know either of them. Three scenarios, choose yours. Anyway, no matter what your scenario is, you get to win something: you get to know Clanton, or you get to know Hexum, or both. So, win-win-win. Since this very moment, you are aware of more amazing music.

Maybe the collaboration between someone like Hexum and Clanton may seem strange, but it makes sense. Clanton’s electronic music has similar starting points as 311’s band (in which Hexum was -is?- lead singer). 311 opted by a classic band formation: drums, bass, guitars, vocals… while Clanton is a 2020’s one-man-orchestra-musician-type that does very good what he does. That said, you may think that the music has to be completely different, and in fact it is. It is recorded in a different way, using different instruments and production, but it’s core is very similar. Is the package what differs. Like those heavy rock bands that do melodies and ballads as if they were classical music, but using heavy guitars and vocals instead of violins. I mean: listen to George Clanton and then take a listen, for example, to 311’s “Beautiful disaster“. You’ll sense the subtle musical-genetical similarities as soon as Hexum starts singing. That’s for not saying 311’s latest works as “Don’t you worry” or similar.

And then one day Clanton meets Hexum, or Hexum meets Clanton, and the result is this album.

Clanton is one of my most valuable recent’s discoveries and I’ve been looping this album as many times as his previous one, “Slide“. The vocals and guitars of Hexum fit perfectly in Clanton’s compositions and production. It’s like they were meant to meet at some point at their musical career.

Listen to that guitar riff at “Aurora Summer“: clear melody, epic, with the subtle voice over, that takes complete control of your state of mind as soon as you listen to that first guitar note. Following is “Out of the blue“, more pop, that leads to “Under your window”, a piece more on Clanton’s side. “Driving in my car“, instead, goes more to Hexum’s side, but again “Topanga State of Mind” is Clanton’s at it’s best. It’s like a tennis match where no one loses but both win.

And we finally arrive to “Crash pad“, one of the most listened tracks of the album, and all around becomes joy. After the masterpiece, you can always expect some change of direction, and that’s what “King for a day” offers: that song that is not well known, but everyone loves, and you can name it to show your proficiency in the artist. But for me is “Time of Wandering” one of the highlights of the album, so correctly placed at the end, to up you a little before finishing with another chilling “Shouldn’ta done that“.

Well, this is a completely biased review, of course, but… that’s what a review is about, isn’t it? So, stop talking about music and go straight play the album right now! 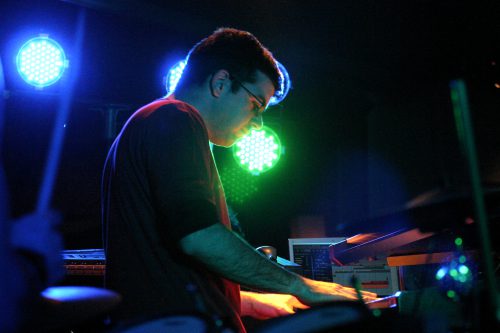 As Frank Zappa, said, "writing about music is like dancing about architecture". Therefore, I'll dance a little architecture in this personal space, where I want to share with you all the amazing music I discover and share with you my passion for music.

Bear in mind that I am a catalan and spanish native speaker, so apologizes for my non-native english. I write in english because, for me, music has always been in english.